Non Sibi Cunctis - Not For Oneself But For All 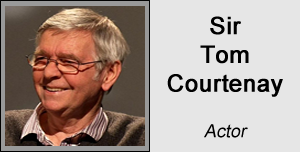 Sir Thomas Daniel "Tom" Courtenay was born on 25 February 1937 and attended Kingston High School in the late 1940s and early 1950s, eventually becoming Head Boy. In his autobiographical book Dear Tom: Letters from Home (2000), Tom pays tribute to the role of English teacher Mr Large in his development as a public speaker and actor. Tom went on to study at the Royal Academy of Dramatic Art (RADA) in London and in 2001, was awarded a Knighthood for 40 years service to cinema and theatre.


Tom made his stage début in 1960 with the Old Vic theatre company at the Lyceum in Edinburgh, before taking over from Albert Finney in the title role of Billy Liar at the Cambridge Theatre in 1961. In 1963, Tom played the same title role in the film version. In the early 1960s, films such as The Loneliness of the Long Distance Runner and Billy Liar became part of the British new wave cinema, and for these performances, Tom was awarded a BAFTA for the most promising newcomer and one for best actor respectively. In 1965, he was nominated for an Academy Award for best supporting actor in the film Dr Zhivago. His other films include Operation Crossbow, One Day in the Life of Ivan Denisovich, King Rat and Night of the Generals. In 1984, Tom was again nominated for an Academy Award for best actor, as was his co-star Albert Finney. More recently, Tom starred in Quartet (2012).


Tom has played many stage roles in Manchester theatres, in plays such as The Playboy of the Western World, The Rivals, King Lear and Uncle Vanya. In 2002, he compiled a one-man show Pretending To Be Me, based on the letters and writings of poet Philip Larkin, who lived in Hull for many years when he was the University of Hull Librarian.


On television and radio, Tom has appeared in She Stoops to Conquer on the BBC (1971) and in several Alan Ayckbourn plays. In 1998, he again played opposite Albert Finney in the BBC drama A Rather English Marriage. Tom also appeared in the 2008 Christmas special of the BBC show The Royle Family, playing the role of Dave's father, David Senior and in the same year, played the role of William Dorrit in a BBC adaptation of Dickens' book.


The Tom Courtenay Cup for Drama, presented to Kingston High School in his honour, is now presented annually to a Sirius Academy student. 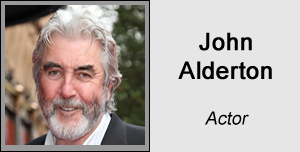 Whilst at Kingston High School, John Alderton was one of a generation of pupils who were greatly encouraged by Mr E. J. C. Large to follow their dreams in theatre and drama. Mr Large was Head of English and an inspirational teacher, who also produced the school's plays. Similarly encouraged by Mr Large were Tom Courtenay and Malcolm Storry.


John was born on 27 November 1940 and attended Kingston in the 1950s. He became famous largely through television roles such as Dr Moone in the early ITV soap opera Emergency Ward 10 (1962 to 1963), teacher Mr Hedges in the sitcom Please Sir (1968 to 1972), Thomas the chauffeur in the drama series Upstairs Downstairs (1971 to 1975), and as the same character in the spin off sitcom Thomas and Sarah, playing opposite his wife Pauline Collins.


John also played teacher Mr Hedges in the 1971 Please Sir feature film. His other film credits include playing vet James Herriot in the 1975 film It Shouldn't Happen to a Vet and Calendar Girls (2003).


John is Honorary President of the Old Kingstonians' Association. 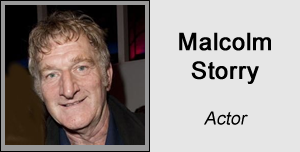 Malcolm Storry was born on 13 January 1948 and attended Kingston High School in the early/mid 1960s. He subsequently trained at Bretton Hall College. Malcolm launched his career in the theatre, but not on stage, as his first big break was behind the scenes, as an assistant stage manager in Manchester in 1969.


In the 1970s and 1980s, Malcolm became a regular on-stage presence for the Royal Shakespeare Company appearing in productions of Tamburlaine, Coriolanus, Richard III, Moliere, La Ronde, Piaf and Volpone. His other stage credits, in the 1990s and continuing today, include After Aida, Knuckle and The Tempest.


On television, Malcolm's appearances include Pie in the Sky, Heartbeat, The Knock, Dangerfield, Pride and Extreme Prejudice, The Singing Detective, Bread or Blood, Sword of Honour and Midsomer Murders.


Malcolm's film credits include Firefox, The Princess Bride, Under Suspicion, The Last of the Mohicans, The Scarlet Letter, The Sailors' Return and The Man Who Knew Too Little. 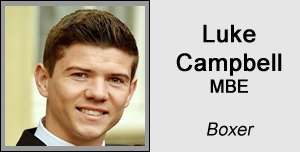 
Luke is a boxer who fights out of the St. Paul's Amateur Boxing Club in Hull, where he first stepped into the ring at the age of 13. Luke was selected to box for England at 15 and he was named the Hull Daily Mail's Hotshot of the Year in 2005 after winning gold at the Junior Olympics. As an amateur, he won the English Senior ABA Bantamweight title in 2007, retaining it in 2008. In the same year, at the European Amateur Boxing Championships in Liverpool, Luke represented England, winning the title, which made him the first Englishman to win a European amateur title since 1961.


After taking a year out to recover from a tendon injury, Luke returned to international competition by winning a gold medal at the Four Nations Challenge in Sheffield. He qualified for the 2012 Olympic Games after winning a silver medal at the 2011 World Amateur Boxing Championships at Bantamweight, in Baku, Azerbaijan. At the 2012 London Olympics, Luke won gold in the 56 kg Bantamweight division, becoming the first bantamweight boxer to win Olympic gold for Great Britain since Henry Thomas in 1908.


To commemorate his gold medal win, a first class postage stamp depicting Luke was issued by the Royal Mail and a post box in Hessle Road in Hull was painted gold. Kingston Communications also commemorated the win by painting in gold one of their telephone boxes, near to St Paul's Amateur Boxing Club. Luke was awarded an MBE in the 2013 New Year Honours List, for services to boxing.


Luke's first professional fight took place on 13 July 2013 at Craven Park in Hull, beating Andy Harris in the first round. He went on to beat Lee Connelly in Hull on 2 November 2013, and in his fifth professional bout, carried on his undefeated record and became the first person to stop Scott Moises.


In early 2013, Luke took part in ITV's Dancing on Ice series 8, skating with professional Jenna Smith. They came third in the final of the competition. In April 2014, Luke announced that he would take a break from boxing, pulling out of his next scheduled bout for family reasons.